Are you feeling just a bit bored and there’s no one around to entertain you? If you can just find a pack of cards from somewhere, you could entertain yourself with solitaire. See if you can beat these three different ways of playing this famous card game.

The card game Klondike Solitaire is the most played and perhaps the most famous of all solitaire games and it’s admittedly the easiest as well. The game’s popularity is highlighted by the many names by which it is known, including Demon Patience and Canfield.

The game’s objective is to build all four suits up, with the ace at the bottom and the king at the top. You’ll need to create seven piles with 28 cards in a way that the first pile has one card, the second two and so on. You’ll then turn the top card of each pile face up. The remaining cards will be where you draw new cards.

You can start piling up each foundation on the ace pile, with the ace at the bottom, then two, then three and so on. In the piles in front of you, you can play cards in descending order and by alternating colours. You can draw the cards from the draw pile one at a time. If you can’t play the card, it goes to a discard pile, with the top card in the pile open to play. The draw pile will only be viewed once, after which you’ve either mastered the game or lost it!

Shuffle your deck well and create a row of seven cards, with face-up. Deal four more similar rows, overlapping the previous ones. You want the cards be placed so that you see each card’s value. This 35-card structure is your tableau.

Once you can’t remove anymore, you need to deal a second card from the draw pile. The final score will be the summary of the cards remaining in the tableau. 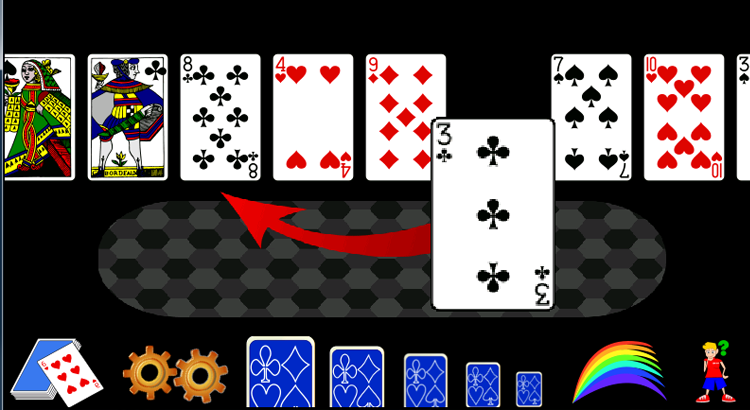 The hardest solitaire game of the three is the Accordion Solitaire. Similar to spider solitaire, the gameplay requires you to plan ahead and use logical thinking in order to beat this tricky game.

The objective is to compress the entire deck into a single pile. You’ll need quite a bit of room for the game, so it can be a good idea to play on the floor.

Shuffle your deck and place the 52 cards in a single row, creating a tableau of cards, overlapping each other face up. You’ll want to compress the tableau by matching cards of suit or rank. You can place a card on top of another, either immediately to its left or on top of a card three spots to the left, if they match in suit or rank.

As you move a card, previously covered cards will need to be moved with it. Furthermore, uncovering a card isn’t possible once you’ve covered it.